The Great Mother Goddess understands that Grimalkins have emotional complexities and, as such, limitations on what they can and can’t accept from others. The subject of forgiveness is one that is never forced upon a creature for there is the understanding that some wounds are too deep for healing.

While forgiveness is a merciful and noble act, it should never be used against a creature who has been wronged most grievously simply to make others feel better about a situation they feel uncomfortable about. Forgiveness is a highly personal issue and a choice only the Grimalkin concerned can make after some long and serious consideration. While some find it easy to forgive, others find it difficult. Those who find forgiveness testing should be treat with kindness and patience; their stories may be sad and they may wish not to discuss them with others. No-one can judge a Grimalkin who chooses not to forgive as one does not know of their circumstances.

Forgiveness must never just be granted without these three things: 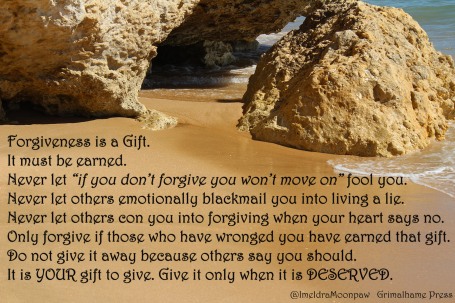 Grimalkins are not bound by social pressure to forgive; it is entirely up to the individual. Much damage can be done when one is pressured into forgiveness by others who want things to be made easier for them because they believe the situation will be resolved that way, and all will be well – for them, and not for the Grimalkin who is being pressured to forgive. That is not how true forgiveness works. Forgiveness has to be earned.

To force someone to forgive and then berate them for not doing so is a terrible thing, a cruel thing. When a creature has been through much toil, they need time to heal and set their thoughts and feelings on the right path again. Much hurt and damage can be caused by those around them who say “if you don’t forgive you can’t move on” and other such falsehoods. One will never move on if one lies to oneself and does something against the wishes of one’s own heart. If the other party has not earned forgiveness, then do not forgive. Do not feel guilty about it. Be sure in your convictions. Do not let others make you feel bad because they do not understand your heart. If they do not understand your toil and despair, then they are at fault. It is a problem they must realise and confront. Let go of the guilt you may feel and do what you know is right.

Forgiveness is a gift to be given to those who truly deserve it and who have earned it otherwise the wrongdoer will never know the value of forgiveness themselves and may never change their behaviour.